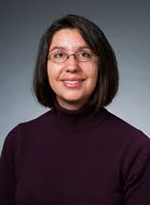 Professor of Pediatrics,
University of Missouri-Kansas City School of Medicine
Chief of the Section of Therapeutic Innovation,
Children’s Mercy

Susan M. Abdel-Rahman, PharmD is a Professor of Pediatrics at UMKC-School of Medicine and Chief of the Section of Therapeutic Innovation at Children’s Mercy in Kansas City.
Dr. Rahman has been involved in basic, applied and clinical research for 20 years with grants and contracts funded by the National Institutes of Health, U.S. Food and Drug Administration, World Health Organization, Centers for Disease Control, Pharmaceutical Industry and Private foundations. She directs a laboratory based research program emphasizing analytical chemistry and molecular genetics and has overseen dozens of clinical trials spanning the range from small, single-site pharmacokinetic studies to large population based epidemiologic investigations.
Notably, Dr. Rahman has enrolled over 28,000 participants into studies for which she served as the Principal Investigator. Dr. Rahman leads a drug discovery program centered around anti-infectives, is developing medical device software centered around clinician-driven decision support, and has developed three physical medical devices, the first of which was cleared by the FDA in 2015 as a first-in-class device.
Finally, Dr. Rahman serves as the Principal Investigator and Program Director for an NIH funded fellowship program in Pediatric Clinical Pharmacology
.