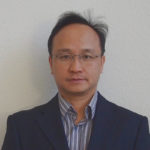 He received his PhD in Electrical & Computer Engineering from Northwestern University, Evanston in 2004. He was summer visiting faculty at the US Air Force Academy 2016 and 2017, affiliated with the UAV Research Center. HE was Sr. Staff Researcher/Sr. Manager with Samsung Research America’s Multimedia Standards Research Lab in Richardson, TX, 2012-2015, Sr. Staff Researcher/Media Analytics Group Lead with FutureWei (Huawei) Technology’s Media Lab in Bridgewater, NJ, 2010~2012, and an Assistant Professor with the Department of Computing, The Hong Kong Polytechnic University from 2008 to 2010, and a Principal Staff Research Engineer with the Multimedia Research Lab, Motorola Labs, from 2000 to 2008.